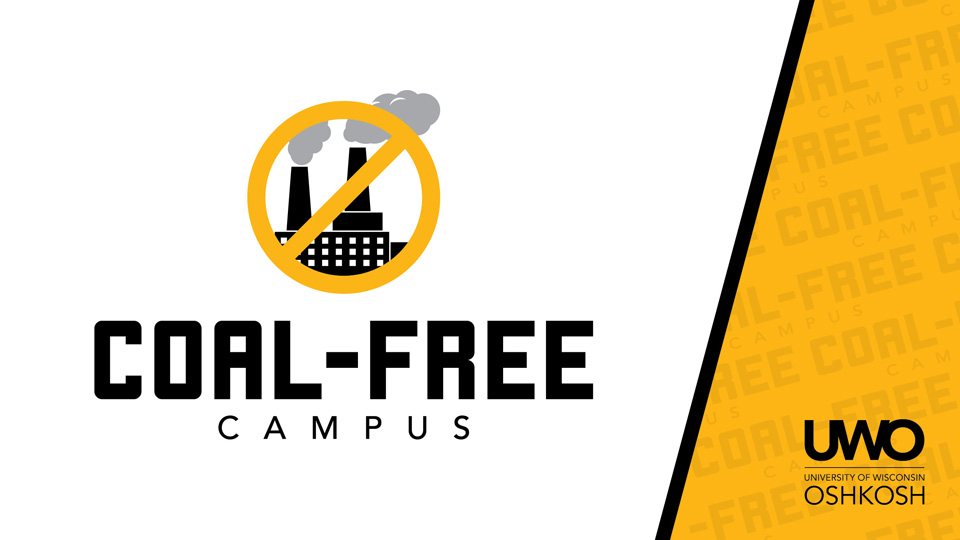 Update: The Coal-Free Campus event planned for Thursday, March 12 has been canceled as University of Wisconsin Oshkosh leadership continues to meet and plan to asses the university’s status related to a coronavirus response.

Workers at the University of Wisconsin Oshkosh Heating Plant are looking forward to days they will no longer deal with all of the work associated with piles of dusty coal that have heated the campus for more than 100 years.

UW Oshkosh and four other UW schools (Platteville, Stevens Point, Stout and Superior) are phasing out their reliance on coal as a heating source. At UWO’s Oshkosh campus, a ceremony on March 12 will mark the day the last truckload of coal is delivered. 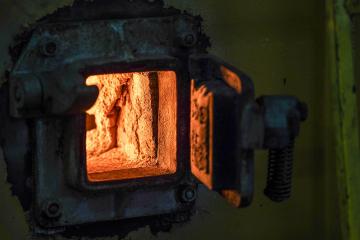 “This is an extremely historic moment for campus,” said Brad Spanbauer, lecturer and campus sustainability officer. “We are ending our run with coal and bridging our move to renewable energy with a cleaner natural gas option.”

The move to a no-coal campus aligns with the Sustainability Office’s commitment to reducing the campus’ ecological footprint and fashioning a durable and better world through its academic mission.

At UW Oshkosh, miles of underground tunnels deliver steam produced by the heating plant to various buildings on campus. Atop the heating plant, there are 16 solar panels that help preheat the water used to create steam.

Each year, the University burns an average of 2,000 tons of coal and 90 tons of pellets—leftover impurities from the recycling of paper. The use of pellets (known in the business as refuse derived fuel) also is being discontinued. A murky place in the basement called “the bunker” houses multiple piles of coal.

“I will not miss coal,” said Heating Plant Superintendent Dan Biese. “There is a lot of busy work and you have to keep an eye on it constantly.”

Workers continually check the inside of the boiler.

Long metal rods called “spuds” are used to scrape ash off the floor of the boiler. There’s physical work to break up chunks of ash. The “heavy” ash goes to the basement and the light ash (fly ash) goes to the ash hopper. All of the ash is mixed with water before it’s hauled by truck to an Outagamie County landfill by staff from the campus grounds crew.

Each season, about 120 tons of ash end up at the landfill.

The move to natural gas will not impact the 175-foot smoke stack; the longtime landmark will remain in place.

But starting this spring, the five-story Heating Plant will be cleared of unneeded coal- and ash-related equipment, including conveyors that are used to haul coal and the ash baghouse.

A new 40,000-gallon above ground tank will be added for additional fuel oil storage (a 25,000-gallon tank exists underground) in the event of a natural gas disruption. The crew is prepared for a potential 72-hour interruption  starting on a Friday during a winter weekend with an inability to obtain a fuel oil delivery until the following Monday morning. 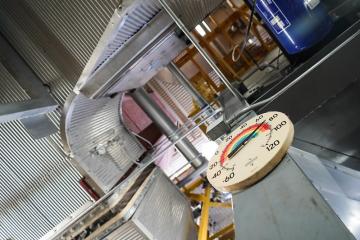 The Heating Plant also houses three chiller units that cool air for all campus buildings. Plans are being made to replace the smallest unit with a new larger unit sometime in coming months.

The crew of seven full-time workers prides itself on maintaining reliable heating and cooling of air and water. Working behind the scenes, they keep the entire campus functioning and comfortable 24 hours a day, seven days a week from their location at Woodland Avenue between High Avenue and Algoma Boulevard. All of the staff worked previously at other power plants – at hospitals, prisons and larger industrial workplaces like the paper mill Biese worked at for the majority of his career.

“Nobody knows what we do,” he said, “unless there is a problem.”

Biese figures they will celebrate the end of coal with members of the University grounds crews who help them haul away the ash.

Interestingly, next winter, for the first time, the Heating Plant crew will be able to regulate the temperature in the building. While burning coal, air in the plant is a toasty 80 degrees.

“We are burning something that is cleaner,” Spanbauer said about the switch to natural gas. “However we do need to recognize the fact that the production of natural gas produces methane―which is a known potent greenhouse gas, about 25 times more powerful at trapping heat in the atmosphere than CO2.”

Fracking in the production of natural gas has been associated with environmental issues of water pollution and earthquakes, which greatly affect the communities in which natural gas is being produced.

“It is important to recognize and be transparent that this switch to natural gas should be considered a short-term, stepping stone,” Spanbauer said.