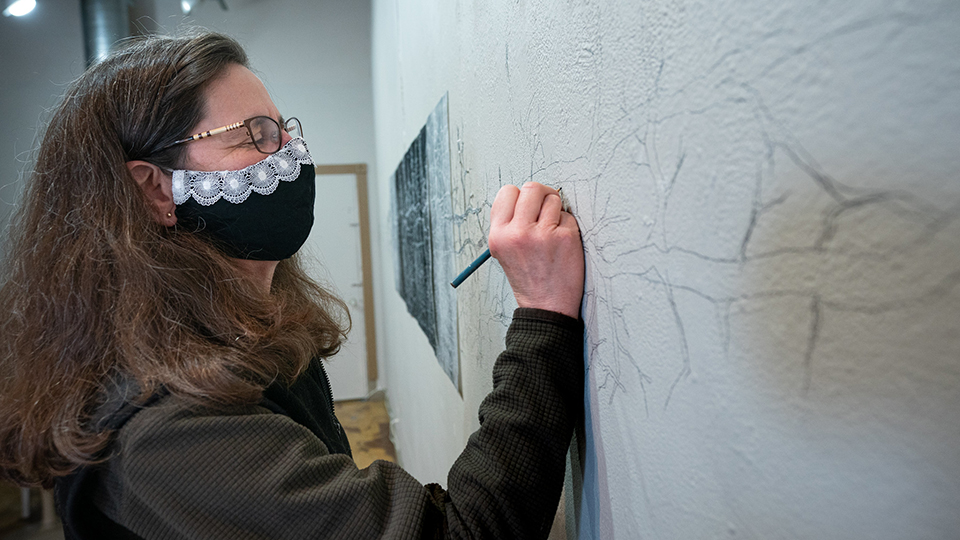 In explaining the themes of her latest public exhibition, University of Wisconsin Oshkosh art professor Gail D. Panske had to look no further than what was on most minds last week: the chaos at the U.S. Capitol.

It’s not immediately obvious how Passing Time, a print installation showing by appointment only at ArtSpace Collective Inc., 7 Merritt Ave., Oshkosh now through Jan. 21, connects to the events of this past Wednesday. It’s there—just a bit below the surface.

One is a handmade loose rendering of Canadian thistle—aka creeping thistle—with both printed elements and others drawn in pencil. The other was a violent takeover of one of America’s most hallowed buildings in support of a president.

So what do you find when you dig in?

“(Canadian thistle) is something that some people might think of it as really beautiful, it’s a beautiful plant with those purple flowers,” she said. “Around here we consider them an invasive species. They’re not native to where we are living. They spread by seed, their root systems are very complicated and if they get cut off they rejuvenate, even if you dig down and take out big chunks of the roots … they continue to grow.

“What’s going on in Washington D.C. right now is that invasive process,” she continued last week as the melee played out on live television. “It’s a seed that doesn’t get controlled. It’s something that’s an invasive species. When I say that, it serves as a metaphor for our current times and our place in the world.” 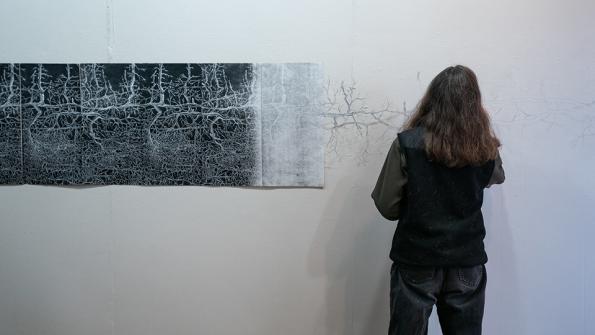 Passing Time began over the summer, with Panske cutting wood blocks 24 inches high and 12 inches wide used to make the first batch of prints. Each is designed so the thistle roots can connect in different places, so in theory they could go on infinitely.

In the ArtSpace, seven of the prints are now hung on the gallery wall. From there, the roots are growing—via Panske drawing them on the walls with pencil—outward to the left and right. Each day she’s adding more and the plan is by the end of the exhibition they’ll connect on the other side of the room. 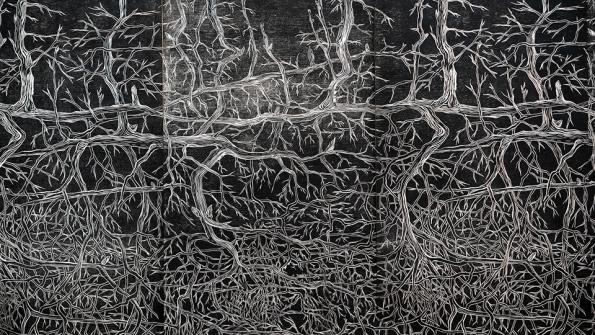 Passing Time is on display through Jan. 21 at ArtSpace Collective Inc. in Oshkosh.

In the Passing Time artist statement, Panske calls the work “a study of circumstance.”

“It depends on our perception and knowledge of the world and our actions within it,” she writes. “We often see time as the numbers on a clock, the tick tock of a pendulum. But it can also be a chronological timeline of events taking place over an extended period of days, weeks, years. Our experience of time depends on circumstance.”

Panske is a founding member and president of the ArtSpace Collective, which is a co-operative gallery that launched in Oshkosh in 1995. There are about 15 members and the co-op puts on a monthly show, plus group exhibitions and other events throughout a typical year. There are no official ties between ArtSpace and UW Oshkosh, but there have been occasional collaborations in the past.

Over the years Panske—who teaches printmaking and drawing courses at UWO—has found “time” to be a concept of interest. The subject matter changes, but the depiction of time remains front of mind. That’s the case here, as the blocks used for the initial prints can be used again years down the road. In contrast, the pencil drawings stretching across the gallery walls will, likely in a matter of weeks, be gone.

Just like an invasive plant or a dangerous ideology, parts can be wiped away in time, while the deepest rooted elements remain.

“Time is a much more complicated thing than sometimes we think of it as,” she said.