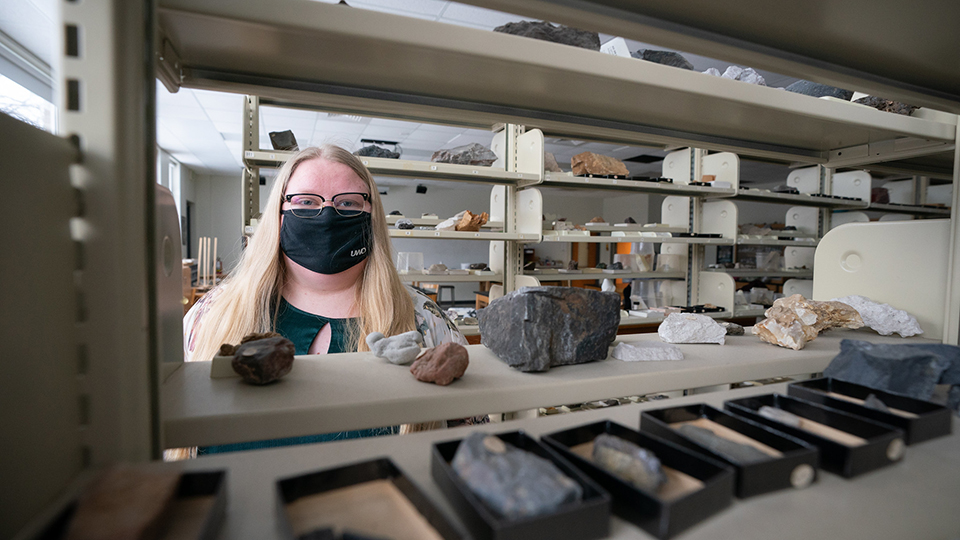 Meghan Krueger has a big-time research opportunity, student work and mentoring―all during her first two years of college at the University of Wisconsin Oshkosh, Fox Cities campus.

Krueger is saving money by starting college at a UW Oshkosh access campus with small class sizes and fewer buildings to navigate … but experiences that have been nothing short of incredible. 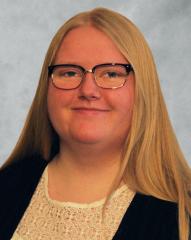 The geology major from Oshkosh is researching an ichthyosaur skull fossil, a marine reptile she says has “uniquely large eyes” and lived in the Jurassic period.

“The fossil I’m studying is unique because it was preserved three-dimensionally, whereas most ichthyosaur fossils are crushed two-dimensionally,” Krueger said, noting she’s been able to explore the paleontological side of geology with the guidance of UWO professors Beth Johnson and Joseph Frederickson.

The fossil appears to be a rare find.

“My research is focused on finding the species of the ichthyosaur fossil,” Krueger said. “There are two main species of ichthyosaur: breviceps and communis. Communis is the most common species and breviceps is more rare. Based on my findings, the specimen appears to be an Ichthyosaurus breviceps.”

Krueger recently was awarded a $2,000 undergraduate scholarship from the Wisconsin Space Grant Consortium for the promotion and retention of students in STEM (science, technology, engineering or math) fields. The scholarship will help cover expenses for her spring semester and is in recognition of her work in geology studies.

Johnson said Krueger is the first student in the history of the award to win the scholarship for a second time. 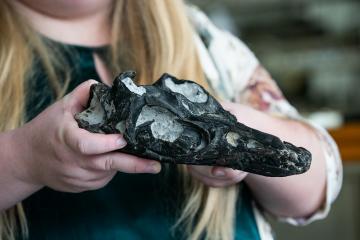 Christine Bolz, assistant director of Wisconsin Space Grant Consortium (WSGC), said Krueger is a great example of how participation in a gateway or introductory program can have vast effects.

“The letters of recommendation submitted on behalf of Meghan spoke to her insatiable desire to learn and grow in her knowledge of geosciences,” Bolz said. “She has taken her experience as a WSGC Undergraduate Scholar to influence her peers and serve as a role model. We are very excited to see Meghan conduct research at the Weis Museum and look forward to watching her be a shining star within the STEM community.”

Krueger, who will complete her second year at UWO Fox Cities this spring, said she’ll explore all forms of geology―she’s not yet decided on a specialty―with an ultimate goal of earning a doctoral degree. She became excited about geology after taking a historical geology class with Johnson.

“Right now I am taking the required general geology classes at UWO Fox Cities,” she said. “I am the student worker for the geology department so I get to help set up labs and handle lab specimens.”

In fall, she plans to transfer to the UWO main campus to continue working on her bachelor’s degree. 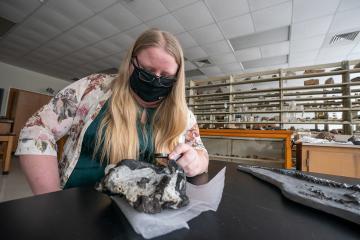 Johnson, associate professor of geology who serves as faculty adviser and research adviser for Krueger, said both UWO and UWO Fox Cities have been long-time members of WSGC and have benefitted from a number of scholarships and research funds.

UWO Fox Cities has been the recipient of undergraduate scholarships, STEM Bridge scholarships to promote STEM participation for members of minority groups and the award-winning Fox Rocketeers collegiate rocketry team.

“This award is important because it not only supports any student willing to put the time and effort into majoring in a STEM field, but it specifically supports students at two-year campuses that are typically overlooked for such recognition because they haven’t had as many opportunities as those candidates from bigger campuses,” Johnson said.

She added that WSGC recognizes opportunities provided to students at two-year campuses and sees them as an investment in the state’s educational and research potential.