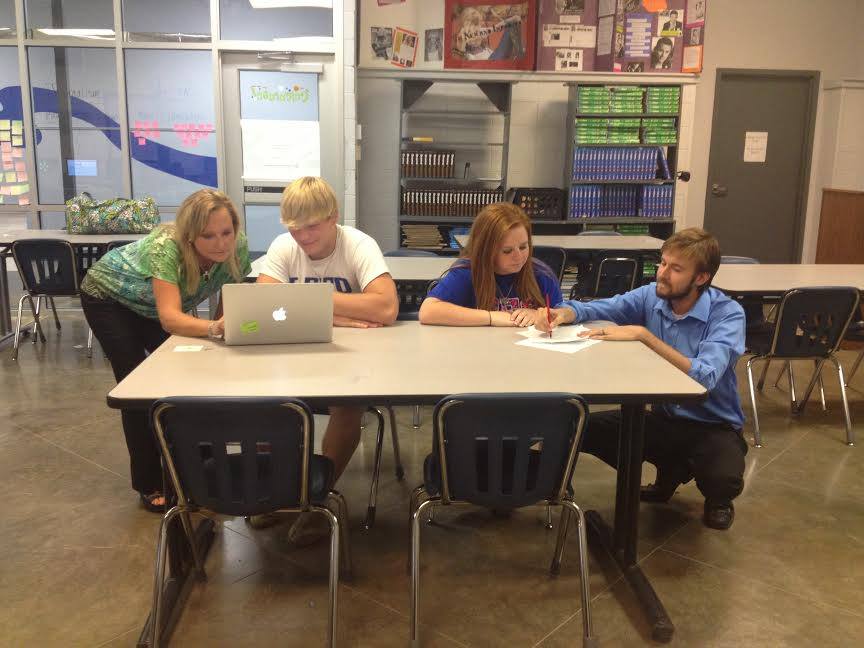 Matt Swenson came to us as a transfer student from UW Fox Valley, where he (like so many others) was first inspired by Prof. George Waller. Back in 2009, Matt was very sure about his goals: get good grades and go to Duke University for law school. But after a very successful undergraduate career at UW Oshkosh, Matt started having second thoughts as he approached graduation in 2012.

Matt decided that instead of applying to law school, he’d apply with Teach for America (TFA), an organization that places new college graduates in under-resourced schools across the country. Because of Matt’s exceptional credentials in college, he was accepted and assigned to his new post at Cross County High School (CCHS) in Cherry Valley, Arkansas. He moved there shortly after graduation with his wife, Karlee, in 2012.

To say that the TFA experience changed Matt’s trajectory is an understatement. Matt was first assigned to teach English at CCHS. He noticed that his students had weak writing skills and decided to do something about it. “I started the first high school peer writing center in the state,” Matt writes.“The CCHS Writing Center trains tutors to provide peer feedback throughout the writing process.” After his first two-year commitment with TFA was through, he signed on for another two years. “In 2014, after seeing our college-bound and college graduation data, I led a district initiative to start a college and career access program. This program focuses on ensuring that students are prepared, eligible, and aware of their options.” This summer, the CCHS College and Career Access (C^3) program was awarded the Chad P. Wick Award for Social Justice.

After serving out his TFA contract and finishing a Master’s degree in Educational Leadership, Matt was offered a position as Assistant Principal at CCHS where he puts his relentless energy and signature optimism into everything he does. “[At CCHS], we want students who can kick butt in the classroom, find their passions, and drive towards them,” he notes. “We want students who can collaborate, effectively speak and write, use technology responsibly, think critically, and be self-advocates. As a New Tech School, we believe that high schools need a complete redesign and my work as a school administrator is to work with our faculty, staff, and community to build a system that works for students of this century and beyond.”

Matt’s double major in Political Science and Philosophy has led him down a path he never expected. We are so proud to call him one of ours (proud, too, to share another alum with the Philosophy department!), and we’re eager to see what’s next.

Want to talk to Matt? Let us know, and we’ll put you in touch!

PHOTO: Matt working with students at the CCHS Writing Center.