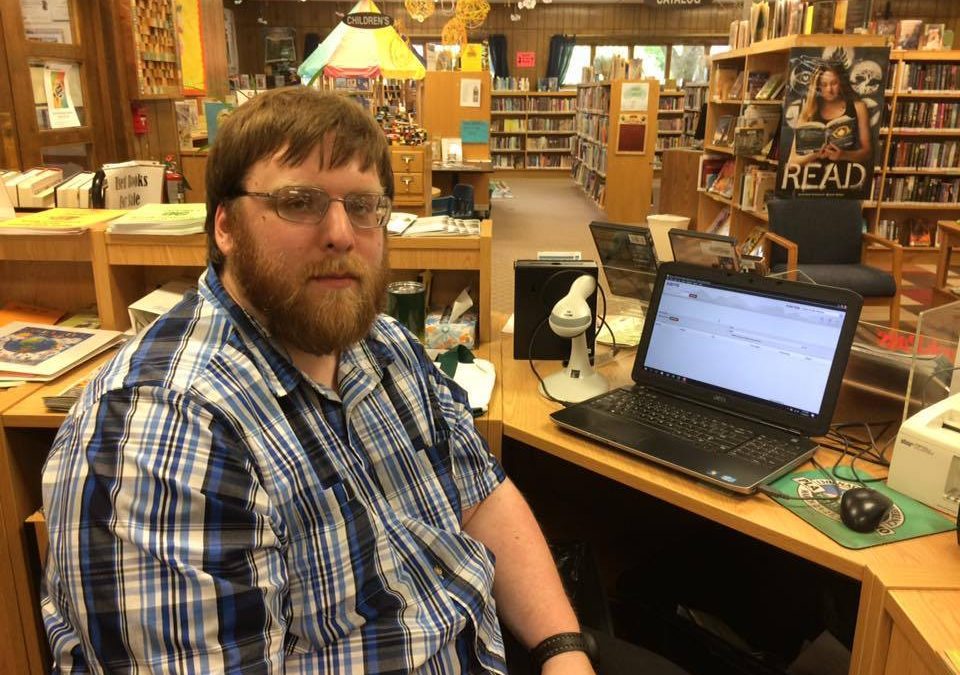 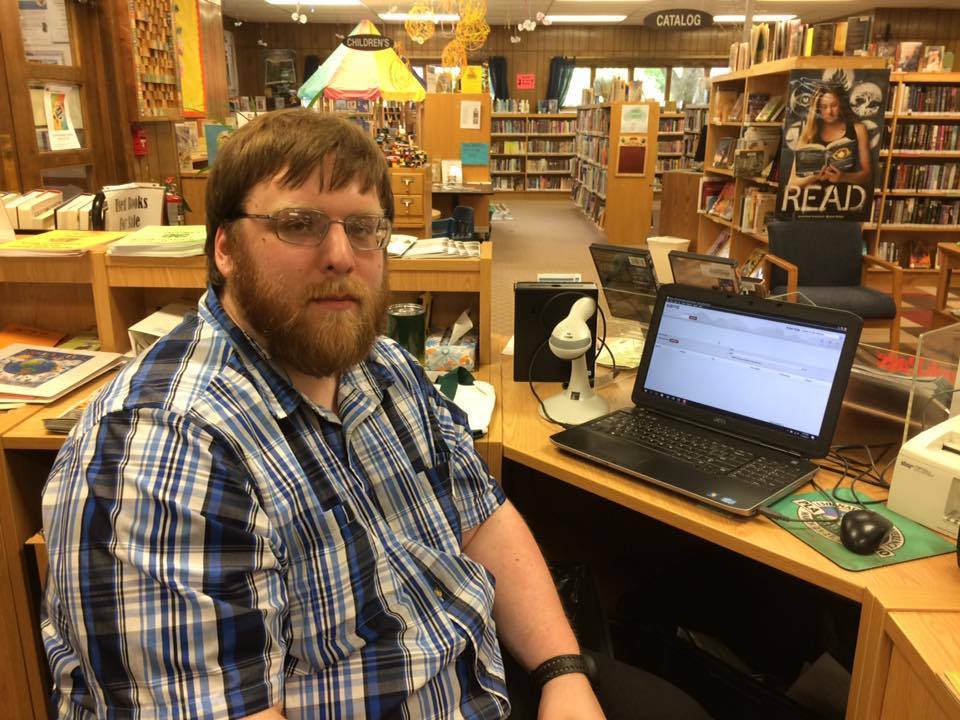 Way up in the Northwoods you will find one of our illustrious alums sharing his German and Political Science knowledge with the good people of Three Lakes, WI. “I am now playing Librarian in the Woods, way the hell up nort’ in some place you’ll be hard pressed to find on a map,” Johnson writes. “Send me warm socks and hot cocoa. To quote one of my favorite books (and its overused adapted show-derived meme): Winter is coming!”

How does a bearded political science major find his way into a career in libraries? His work at UW Oshkosh proved to be crucial. “It started at my first semester at UWO when I was one of those lucky few who got a coveted library job. What began as an 8 hour/week job that year became 24 hrs/week in three departments for my last year, wherein I hatched the crazy idea of becoming a librarian,” he notes. “I also dabbled with tutoring, which ultimately is a similar job to being a librarian like my kind. Fast forward to May of this year, while working two part-time library jobs, doing most of the same things as I am in this job, when a coworker forwarded me the job listing for this position.”

Johnson is new is in position in Three Lakes, which is full-time and offers him benefits while doing something he loves. “I also could have (probably) gone into a more profitable and easy to get full time status field, but this is what I decided I enjoy doing, so I’ve accepted the consequences.” The perks? Well, Johnson has a job that allows him to indulge his passions and help people at the same time. He has a lot of regular duties (cataloging books, library newsletter, etc.), but also can develop new projects. “Things I’m building include regular programs, such as game nights for teens and building pencil-and-rubber band catapults (the schools are gonna love me). For adults, I’m working on getting the word out to the population (mean age in the area is about 55) that I would love to help them with the computers they buy or are given from (grand) children. Locals also tell me I need to organize food competitions [note: Johnson is a Wiener Schnitzel connoisseur and chef and has a potential Schnitzel cook-off with a local restauranteur in the works]. I also am helping with the high school Drama Club. Why? Why not! Theater is fun.”

How does a degree in Political Science help him way up in Three Lakes? “The classic librarian education is English. But libraries are soooooo much more than books these days. Libraries are among the oldest institutions of human civilization, going back to the ancient Mesopotamian states. They have survived so long, in part, because they are very flexible institutions that evolve to meet the needs of whatever society they are in. Don’t believe me? Go into a library and see how we’re more than old, cardigan-clad, hair bun-sporting little old women with glasses on a neck chain shushing you and glaring at you to be quiet!”

Johnson continues: “Political Science is helpful for numerous reasons: first, it’s not the most common background among librarians and the best library staffs have a diverse knowledge base to work from. Second, knowing how governments work and being able to translate legalese into the vernacular is very helpful for most libraries. The public at large who use libraries (public, academic, etc.) are not typically lawyers. Students, average Joes and Janes, old and young, and anything in between…most people don’t know how even basic poli sci bread and butter work.”

It shouldn’t be surprising that this future librarian was cataloging a whole lot of his experiences at UW Oshkosh. Johnson still has a lengthy document that contains quotes he loves, and some of them are from people you know (like Krueger, Slagter, and Jasinski!) His interests outside of work? “My interests are the largely nerdy: science fiction books and film, board games, video games, different styles of beer besides cheap pilsner, learning languages, anything to do with cats,” he writes.

Maybe you, too, might like work as a librarian? If so, Johnson has loads of advice for you — more than we can re-post here. But we have his contact information and would love to pass it along — all you have to do is ask! And if you’re ever near Three Lakes, pop in to visit our favorite Northwoods librarian, won’t you?