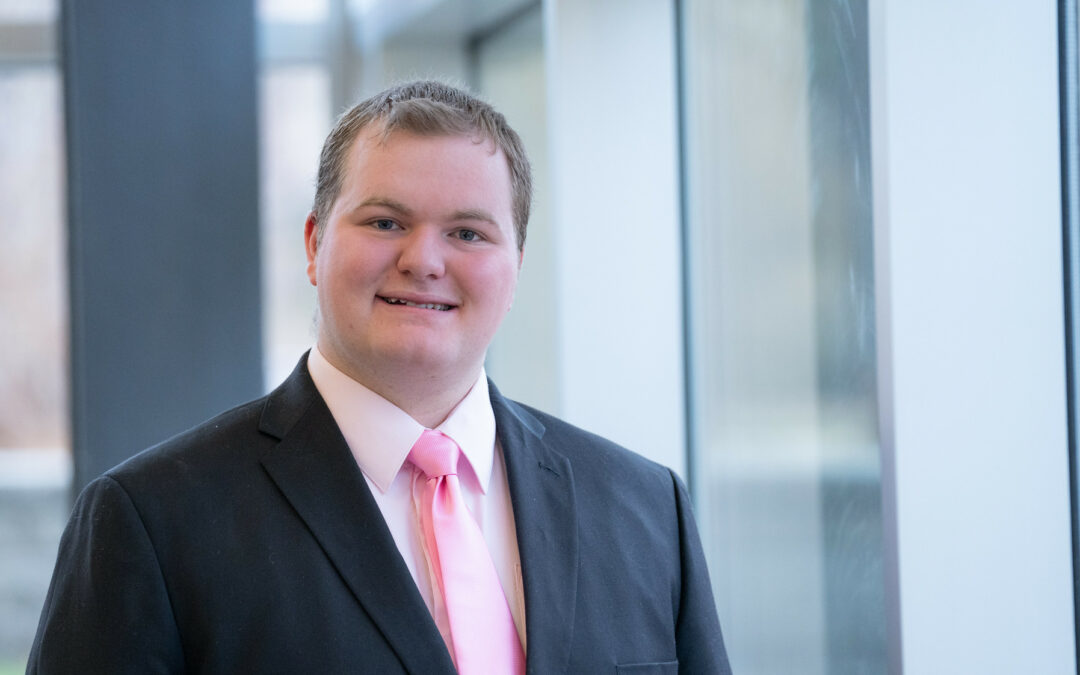 Jarod Falk is helping people understand his world of autism.

The College of Business junior completed a summer internship this year at Oshkosh Corp., organizing their first-ever autism awareness program as part of their diversity and inclusion program. He also gave the opening address.

“I was trying to get people to understand what autism is and skills those on the autism spectrum bring to the workforce,” he said.

The program drew about 80 people in person and more than 100 attended virtually.

Falk said he strived to keep people engaged and took time to answer questions. He arranged for a pair of guest speakers and made sure to bring a supply of swag he ordered—large drink bottles and drawstring bags emblazoned with the Oshkosh Corp. logo and his words Autism: Always Unique. He made a 46-page booklet of local resources and contacts available to attendees.

“Some people openly shared that they lived with autism or they have a family member who did,” Hoelzel said. “It opened the eyes of many team members to slow down and think about how to react to certain situations and how to also interact  with team members with disabilities.”

Falk’s parents—Wendy ’99, who is an educator and counselor, and Chris ‘97, a medical technologist—and grandparents were on hand to see him lead the presentation.

Wendy Falk said she started crying as she watched her son lead the event at Oshkosh Corp. headquarters. All of the years of challenges and hard work were rewarded within that presentation. Emotions poured out in the form of happy tears.

“There are no words,” she said, explaining that her son has far exceeded any expectations they had when he was diagnosed with autism 20 years ago.

Falk spent two years on the UWO Swimming and Diving Team but needed to step away when it interfered too much with his studies.

Falk earned his driver’s license after his parents made sure he was ready by extending his temporary permit. He has a job working weekends as a server at an Appleton restaurant, Pullmans at Trolley Square, on the Fox River. He has future career goals of working in business and hopes to continue with Oshkosh Corp. or another larger employer in human resources—preferably, he says, in talent acquisition. His ultimate career aspiration is to be a chief human resources officer.

Falk credits his parents for their support, high standards and for pushing him to excel in life. He said he was non-verbal to age 5. His parents were involved in his activities, including his time as a Boy Scout.

Jarod, 22, and his sister, Natalie, 18, both have autism while their sister, Maria, 20, is neuro-typical. Currently, all three are furthering their education in traditional college or technical college settings.

Wendy Falk said all the pushing and many years of in-home therapy sessions were critical. Falk was diagnosed with autism when he was 2½ and a developmental pediatrician at UW-Madison told the family the three years that followed would be critical to his future.

“A child with autism tries to make their own world and make everyone else fit into that world. That’s not how the world works,” Wendy Falk said.

People with autism might have vocal delays, sensory issues, difficulty with a change in routine or connecting with people. But there oftentimes are wonderful strengths: learning things in detail and having the ability to remember information for long periods of time, having strong auditory and visual learning abilities and excelling in math, science, music or art. Jarod likes being well-prepared in his work environment and he has a strong work ethic.

Wendy Falk said her son wasn’t always comfortable talking about autism and didn’t want anyone to know about his diagnosis. Recently he disclosed it in a cover letter, letting the prospective employer know about his autism and the skills he could bring to the organization.

“He changed the whole approach,” Wendy Falk said, who added that his strengths might make him better than the next candidate. “Now he’s speaking out for every other kid like him.”

Initially, Falk considered another UW campus, but decided he could save money by living at home and he would have family support while continuing the Titan legacy.

Falk said he prefers to be very organized and structured. Autism affects learning, he explained, so his success in school can depend on the instructor. One of his favorite instructors is senior accounting lecturer Wendy Potratz.

Potratz worked with Falk through the Accounting 206 Essentials of Financial Accounting course. She said he became an active member of Accounting Club during the fall 2021 semester.

“His ability to interact with professionals and the ease he displayed at our club networking events provided a great example to other club members on how to make meaningful connections,” she said.

Wendy Falk has no doubt her son will graduate and be gainfully employed in a few years. She imagines he’ll be living on his own and be intent on working his way up the corporate ladder.

The route may have a few twists and turns, but that’s OK. She likened his journey to taking I-41 or U.S. 45 along Lake Winnebago—vastly different routes, but travelers end up in the same place, she said.

“Autism is one part of you—not all of you,” she tells her son. “It does not define who you are.”