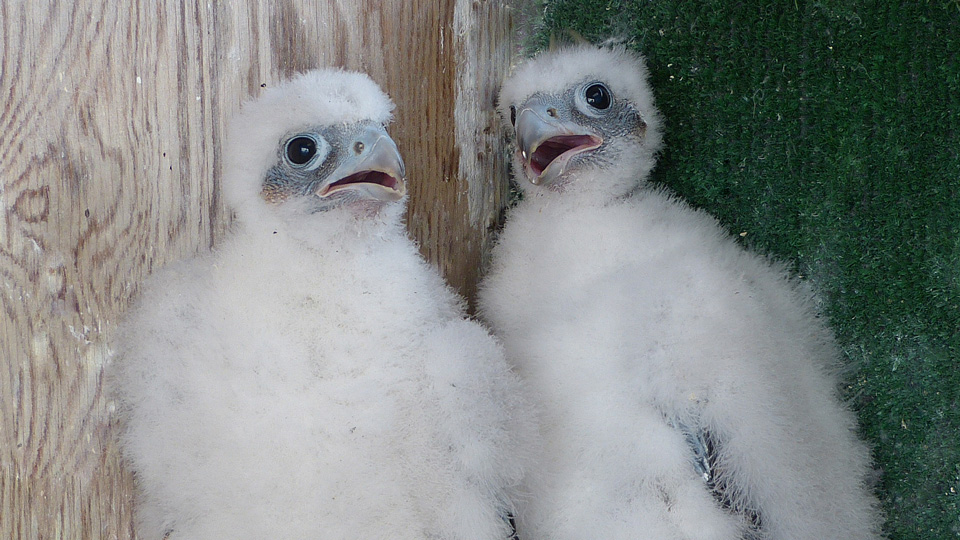 Though campus is closed due to coronavirus, two peregrine falcons hatched on top of the University of Wisconsin Oshkosh’s Gruenhagen Conference Center were officially named and banded this week. 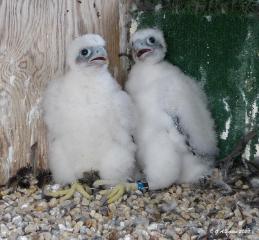 “In light of the attributes that the UW Oshkosh staff would like people to remember in these challenging times, the falcon chicks have been named Strength and Courage,” said Greg Septon, an independent peregrine specialist, who placed leg bands to help keep track of the raptors.

Peregrines like to live in tall trees, but Septon, founder of the Wisconsin Peregrine Falcon Recovery Project, said a large percent of peregrine nests exist on human-built structures, including corporate buildings and utility towers. Peregrine falcons  have been nesting atop Gruenhagen Conference Center since 2011.

Septon said the South Gruenhagen site provides a high location where the raptors can defend their territory, without predators or people.

Peregrines are known as the fastest animals on the planet, capable of reaching speeds of 200 mph during a dive. They feed almost exclusively on birds they strike in midair and grasp with their talons. Septon, at a previous banding event, said the raptors’ “No. 1 food source” are blue jays, along with pigeons and other birds.

Septon did the banding at UW Oshkosh with proper use of personal protection equipment and with just one other person for access and safety. He rode the Gruenhagen elevator alone and maintained social distancing near the nest, before returning the banded peregrine to the nest.

Campus is closed due to coronavirus and the banding took place without University photography staff or media.

The UWO Department of Residence Life has been overseeing the campus peregrine falcon program, but was planning to transfer the program to the Sustainability Office, moving forward.