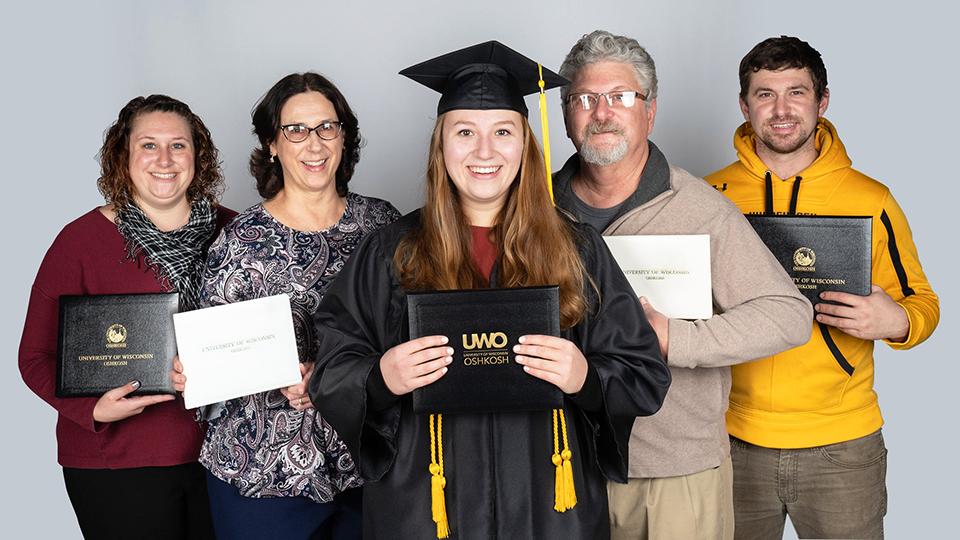 Senior Michelle Lokken has accomplished a lot during her time as a student at the University of Wisconsin Oshkosh—including publishing a book and earning a 4.0 cumulative GPA. But the midyear graduate from Oshkosh might be most proud of becoming a third-generation UW Oshkosh alum and the sixth member of her extended family to earn a degree from UWO in a span of nearly 60 years.

“It’s really special to have that big of a connection to the same school,” Michelle said. “I am very grateful that members of my family have been able to earn their bachelor’s degree, and it’s inspiring to know that my grandmother makes me a third-generation graduate.” 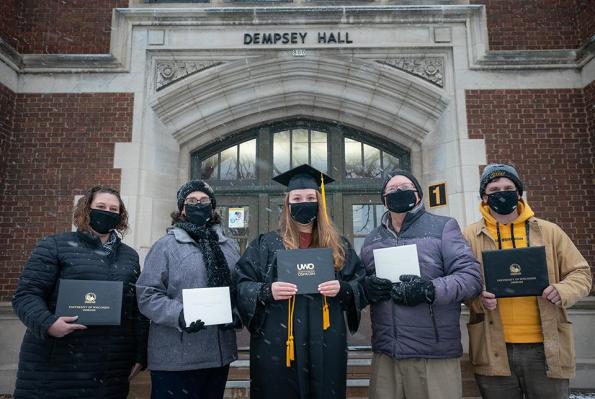 Michelle Lokken (center, with her parents and siblings) is the sixth member of her extended family to graduate from UW Oshkosh.

Neva Helm used the training program at UW-Stevens Point—known then as Central State Teachers College—to begin teaching at the age 18. Her initial years of teaching were in a one-room schoolhouse. She taught for 11 years from 1944 to 1955, before stopping to raise a family.

Helm continued to take courses at UWO—then known as Wisconsin State College—and graduated with her bachelor’s degree in lower elementary education in August 1962. 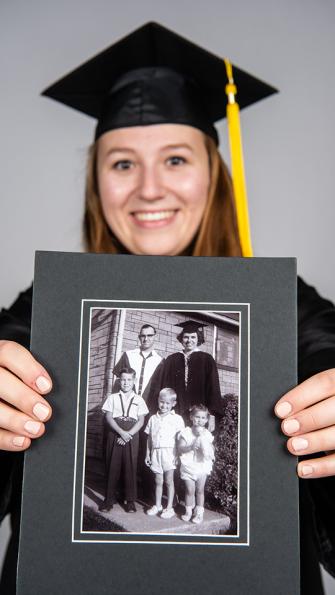 “It’s remarkable to know that my grandmother completed her degree during a time when not many women went to college,” Michelle said. “Her accomplishment is even more admirable since she completed her degree while raising three small children and being pregnant with her fourth child.”

Nancy, who enjoyed hearing the stories her mother told about the schoolhouse, followed her mother’s career path. She became a second-generation UWO graduate and second-generation teacher after earning a bachelor’s degree in elementary education with a minor in learning disabilities in 1981.

“UWO was a good choice given the fact that I was pursuing a degree in education,” Nancy said. “It also was in my hometown, making it a very affordable choice.”

Nancy went on to have a 37-year teaching career with the School District of Omro, including the final 30 years as a first-grade teacher.

“While teaching first grade, I had the opportunity to supervise student teachers, all of which were UWO students,” Nancy said.

She retired at the end of the 2017-18 school year but has since returned to the district as a substitute teacher.

While both Nancy and Dave Lokken attended UWO at the same time in the late 1970s and early ’80s, they didn’t meet until 1984. Nancy went to a Titans basketball game at Kolf Sports Center with a friend in January of that year and met Dave later that night.

The two married in 1985 and went on to have three children: Danielle, Michael and Michelle. All three continued the UWO family tradition, which included attending the University while living at home.

Danielle, like both her grandmother and mother, went the teaching route while at UWO. Growing up, she saw first hand the impact her mom had as a teacher. 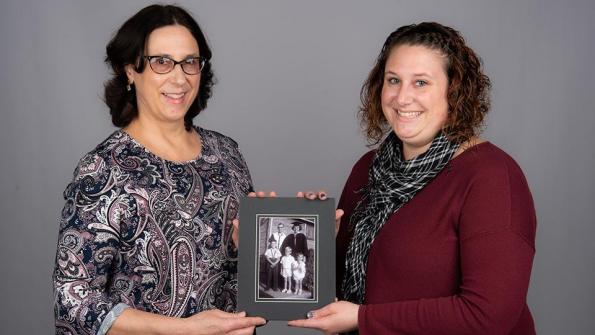 Three generations of teachers in one family, including Nancy (left) and Danielle Lokken, have earned degrees at UW Oshkosh.

“I would go to school with my mom,” Danielle said. “I thought it was so cool that my mom had this different life and was a different person at school.”

Danielle volunteered in her mom’s classroom when she first got to UWO, sealing the deal that she too wanted to be a teacher. She earned her elementary education degree in 2013 and now is in her sixth year teaching sixth and seventh grade in the Iola-Scandinavia school district.

“I love it,” Danielle said.

Michael—who Michelle says is the one “who made the most out of his college experience”—graduated with a music degree in 2017. He was part of the track and field team his first year, performed in a number of concerts, ran for Homecoming Court in 2013, was part of a fraternity and started a DJ club.

“Michael was very excited to learn about everything UWO had to offer and he became heavily involved in campus life,” Michelle said.

He also was involved in TitanTV, including a show called Can You Cut the Mustard? His younger sister has fond memories of his time with that show. 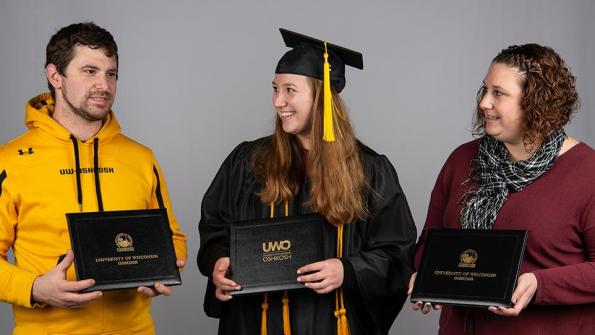 Michael worked in Reeve Union and was a summer tour guide with the Admissions office, a job he said made him even more “obsessed” with UWO.

“I loved having my fingers in as many things as I could,” Michael said.

He continues to be a DJ around the Fox Valley, is involved with the Main Street Music Festival and plays drums for his church’s contemporary worship service and percussion for the Oshkosh Area Community Band.

Competing in National History Day while in high school and working as a security guide at the Paine Art Center and Gardens sparked Michelle’s interest in history.

She originally considered different universities that offered unique history majors, but ultimately Michelle knew UWO was where she wanted to be.

“With my entire immediate family being UWO alumni, I wanted to be part of that,” she said. “I also wanted to stay involved with the local history scene in Oshkosh rather than starting from scratch in a new city. I knew I could complement my history coursework well with other relevant experiences in the community.”

Having completed a number of Cooperative Academic Partnership Program courses when at Oshkosh North High School, Michelle was able to dive straight into her major when starting at UWO.

And it was in one of her history classes that helped her get started working on a book.

“I thought it would be really cool to publish a pictorial history title, but did not put much serious effort into actually starting the project until I took Advanced Composition with Dr. Christine Roth,” said Michelle. “She made Oshkosh the theme of her class, and I decided to use the paper I produced for that class as a jump start on my postcard history book.” 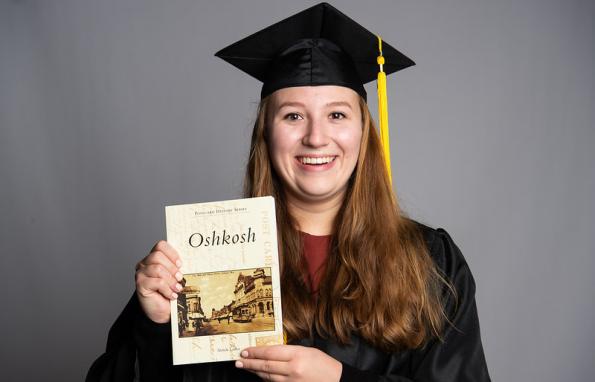 Michelle Lokken published a book about Oshkosh history this summer.

Michelle used her final paper as a pitch to Arcadia Publishing. In July, she published Oshkosh, part of the publishing company’s Postcard History Series.

“It is still extremely surreal to see my own publication on the store shelves and online,” Michelle said.

Usually focused on the past, Michelle is now looking toward the future. After graduation she will be working as the program coordinator at the Manitowoc County Historical Society.

“I am very excited to be working in public history and using my degree straight out of college,” she said.