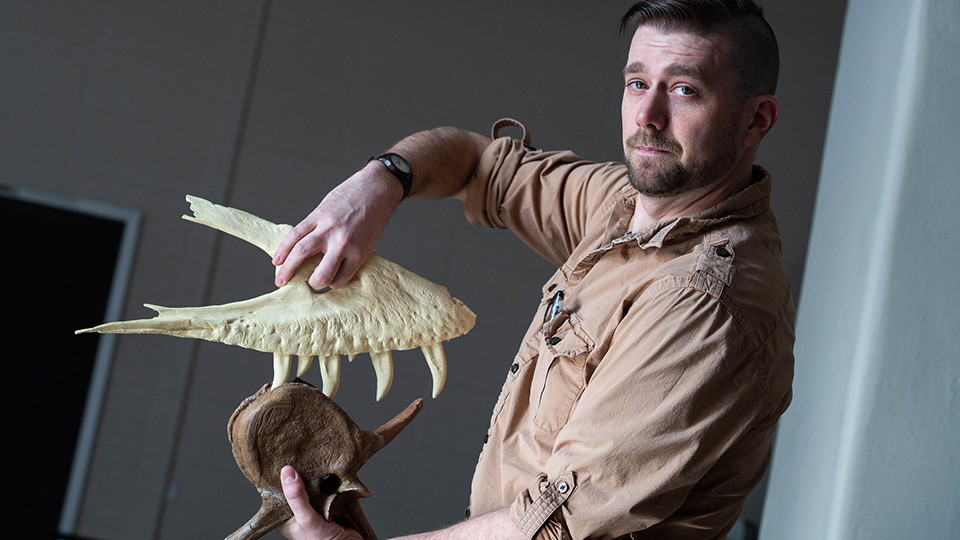 By the age of 13, the bite force of a Tyrannosaurus rex could already puncture bone.

The new University of Wisconsin Oshkosh research finding published June 2 in the journal PeerJ fills a gap in knowledge about what the world was like in the late Cretaceous Period. 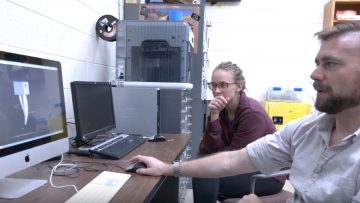 UW Oshkosh paleontologist Joseph Peterson and geology alumna Shannon Brink ’20, a graduate student at East Carolina University in Greenville, North Carolina, teamed with colleague Jack Tseng at the  University of California Berkeley to replicate bite marks made in a fossilized dinosaur bone made by a juvenile T. rex.

The researchers made a metal replica of a scimitar-shaped tooth of a 13-year-old juvie T. rex, mounted it on a mechanical testing frame commonly used in engineering and materials science, and tried to crack a cow leg bone with it.

Based on 17 successful attempts to match the depth and shape of the bite marks on the fossils, they determined that a juvenile could have exerted up to 5,641 newtons of force, somewhere between the jaw forces exerted by a hyena and a crocodile.

Bite force measurements can help paleontologists understand the ecosystem in which dinosaurs—or any extinct animal—lived, which predators were powerful enough to eat which prey, and what other predators they competed with.

The study reveals that juvenile T. rexes, while not yet able to crush bones like their 30- or 40-year-old parents, were developing their biting techniques and strengthening their jaw muscles to be able do so once their adult teeth came in.

“This actually gives us a little bit of a metric to help us gauge how quickly the bite force is changing from juvenile to adulthood, and something to compare with how the body is changing during that same period of time,” Peterson said. “Are they already crushing bone? No, but they are puncturing it. It allows us to get a better idea of how they are feeding, what they are eating. It is just adding more to that full picture of how animals like tyrannosaurs lived and grew and the roles that they played in that ecosystem.”

The measurements are a start in charting the increase in tyrannosaurs’ bite force as they mature, similar to how paleontologists have charted T. rex size and weight with age.

“Just as you can do a growth curve for such an organism, you can also do a strength curve for their bite force — what was their bite force at 12 or 13 years old, what was it at 30, 35 or 40 years old. And what does that potentially mean about the role that those animals played in that ecosystem at the time?” Peterson said. “What’s cool about finding bite marks in bone from a juvenile tyrannosaur is that it is tells us that at 13 years old, they weren’t capable of crushing bone yet, but they were already trying, they were puncturing bone, pretty deep. They are probably building up their strength as they get older.”

Peterson and Brink’s work at UWO was supported by a collaborative grant from the Office of Student Research and Creative Activity.