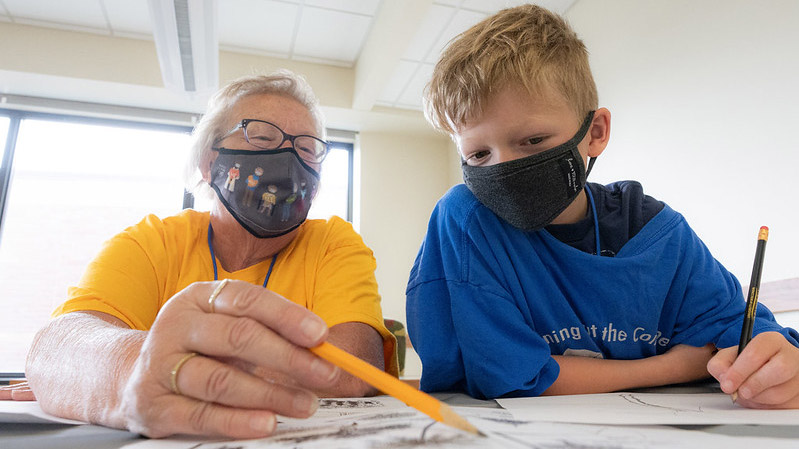 Once again, Grandparents University has brought grandparents and their grandchildren together at the University of Wisconsin Oshkosh for a day of fun-filled exploration and learning.

Typically a two-day event on the Oshkosh campus, the program took place this year on July 15 and was shortened to just one day to help protect the safety of those attending.

Grandparents University is a summer academy that allows grandparents and their grandchildren, ages 8 to 12, to select a “major” to learn and explore together. Majors this year included Awesome Artists, Roaring Rockets and Spectacular Scientists. Each major included hands-on activities and demonstrations that helped encourage participants to learn and have fun. 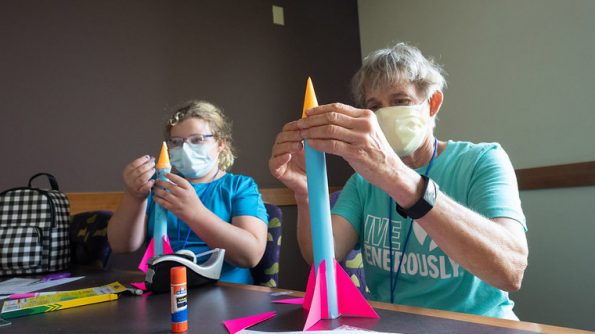 Every year, the program concludes with a commencement ceremony to honor the new graduates for completing their majors. But this year was special, because three groups attending received a Grandparents University bachelor’s degree for having participated in the program for four years running.

Kim Freier and her granddaughter, Morgan Bessette, were among those awarded the  degree and they couldn’t have been more excited to receive their diplomas.

Freier, a previous employee for the UWO’s Division of Online and Continuing Education, knew since the start of Grandparents University that it was something that she wanted to do with her oldest granddaughter.

“We joined our first year together and had such a good time. Now, here we are for our fourth year,” Freier said.

For them, the best part about participating in the program year after year is being able to learn and gain new experiences together. 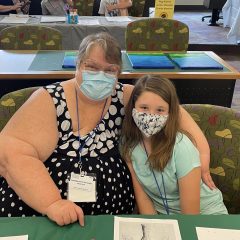 As she drew a beautiful picture of a tree, Bessette said she agreed with her grandmother and added that Awesome Artists has been her favorite major of all.

Almost every group attending Grandparents University this year had a previous connection to UWO, either as a graduate, previous UWO employee, or a parent of alum—and all were happy to be back on campus.

Gerald and Sue Poquette, both alumni themselves, also received their bachelor’s degree this year with their grandsons, Clayton and Gavin Poquette. For them, it’s fun being able to return to campus for the program each year.

“Grandparents University gives us the opportunity to share time with our grandchildren, but also to come back to the University we both graduated from some time ago and see all the changes that have been made since,” Gerald Poquette said.