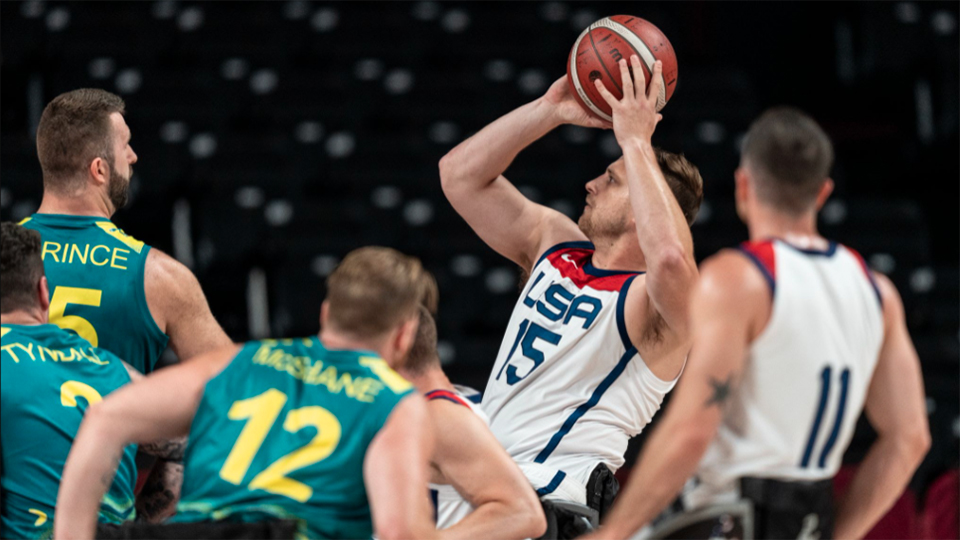 When it comes to educators with first-hand stories of inspiration, you could do worse than Nate Hinze.

The 33-year-old from Cedar Grove, who earned a master’s degree in educational leadership and policy from the University of Wisconsin Oshkosh in 2016, is in his second year as the athletic director and assistant principal at Port Washington High School. And while his career as a high school administrator is still young, the athletic career that once seemed impossible has now come to a close—after winning a bronze and two gold medals in three trips to the Paralympic Games in 12 years.

The second of those golds came last month in what will be Hinze’s final games with Team USA. A husband and father of three, he’s looking forward to spending more time with his family and not having to leave for sometimes weeks at a time for training or competition. Now it’s time for tee-ball and swim lessons.

“It’s hard to do the FaceTime calls and having them ask where I am or when I’m coming home,” Hinze said. “The hardest part of representing (the U.S.) is being away from the family.”

Hinze’s journey is one that begins with a four-sport high school athlete, adds a shocking cancer diagnosis, a major surgery and many long hours of recovery and rehabilitation. Then, as a first-year student on the campus of UW-Whitewater, a curious visit to the wheelchair basketball office that began an incredibly successful 15-year career. 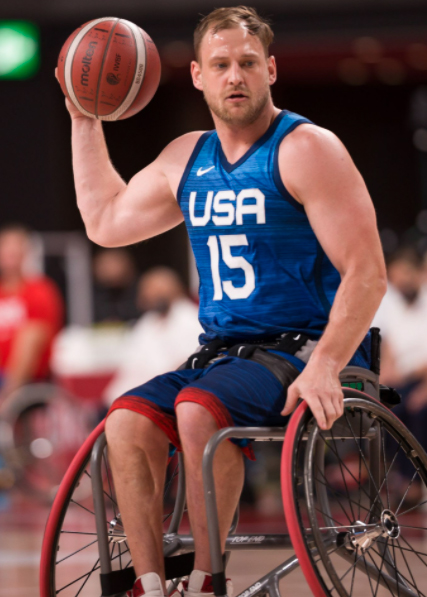 In September, Nate Hinze won his second gold medal at the Paralympic Games in Tokyo.

Hinze first felt the bump on his right shin in the fall of his junior year at Cedar Grove-Belgium High School. It was late in the football season when he came out of a pile wrestling for a fumble when he felt a little soreness. Instead of disappearing in a week or two like most bruises on a 16-year-old athlete, it stuck around through basketball season. Eventually he felt pain walking up stairs, then while running.

He got it checked out, first with an X-ray and then an MRI. The diagnosis was osteosarcoma, a bone cancer common in the long leg bones. He said it was only about two or three weeks between the initial X-ray and the start of chemotherapy.

“It was pretty devastating to receive the diagnosis,” he said. “Not just because of the severity and the unknown, but also having my opportunity to play sports and athletics taken away was equally as devastating.”

Six months after the chemo began, Hinze endured a 14-hour surgery. Doctors removed his knee and part of his tibia and replaced it with titanium. The result he described as “like a prosthetic leg covered in skin and muscle.”

“That was kind of a second to last resort,” he remembered. “Going into the surgery the surgeon told me they were going to try to save my leg, but unfortunately they couldn’t make any guarantees.”

The teenager who months earlier was a football, basketball, baseball and track athlete began his senior year in a motorized wheelchair.

Fast-forward a year and Hinze was beginning his pursuit of an education degree at UW-Whitewater. He didn’t choose to go there because of the wheelchair basketball program—he hadn’t yet tried the sport—but it was in the back of his mind when he selected to stay near home and his doctors.

That said, it didn’t take long to check out the options.

“During freshman orientation I kind of got bored. It was hard for me to walk around, so I went to the wheelchair basketball office and asked if I could help out as manager,” he said. ” … Then I kind of asked, ‘What if I wanted to play?’ and they were like, ‘You need to have a disability.’ I rolled up my pant leg and showed them my scar and they were like, ‘Wow, yeah, you definitely qualify.'”

They told him to take the weekend to think about it and when he returned that next Monday, he found out he couldn’t be the manager—because they were going to make him play. 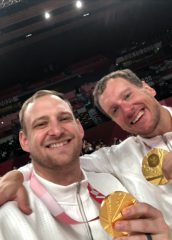 Nate Hinze, left, flashes a gold medal with a teammate.

And so he did.

“My first time shooting from a chair, it was right there in Whitewater,” Hinze said. “I have the date written down in my calendar because my coach and I always joke that it was my anniversary. It was Sept. 5, 2006.

As you might have guessed, Hinze took to wheelchair basketball fairly quickly. He learned the rules, picked up on the strategies and worked hard to strengthen his upper body to better bang with the big men down in the paint.

“I’m a big guy, I’m down low getting rebounds,” he said, describing his game. “Wheelchair basketball is a lot more physical than people think. There’s a lot of chair contact that is legal. You can physically stop somebody, you can chair somebody up as we say, so that’s my kind of game.”

Within a few years, he was competing at a high level and, in 2009, came a breakthrough: He was selected to play for the national team. At the time, Team USA was regrouping after returning from a second straight Paralympic Games without medals.

Hinze would be a part of a youth movement in the program, resulting in a bronze finish in London in 2012, followed by gold in Rio in 2016—the first top finish for the U.S. men’s wheelchair basketball team in 28 years. (Along with the gold medal, 2016 was also the year Hinze earned his master’s at UW Oshkosh.)

After having to wait an extra year because of the pandemic, the games planned for Tokyo in 2020 were staged in 2021. The Americans again won big, successfully defending their gold medal with a win over Japan on Sept. 5. That secured Hinze’s third and final medal—and his second gold. 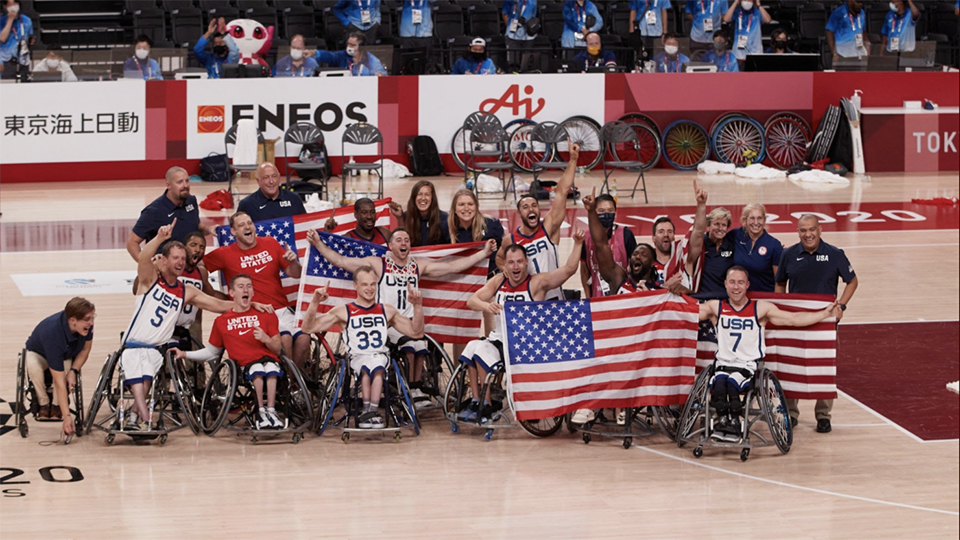 It’s been an odyssey of nearly 20 years with the expected highs and lows. But as he now moves into another phase of his life, Hinze has first-hand experience with overcoming adversity that can help him guide students for years to come.

“One thing I like to tell my students is that not everybody’s adversity is something you can see,” he said. “My obstacle when I was in high school was obviously very visual. You could see I lost my hair, I was in a wheelchair, I have a big scar on my leg. You could see that I was going through something—that I had some adversity in my personal life.”

As he’s gained more life experience, he’s learned not everyone who is struggling with something is doing it so out in the open. Students in his high school might be dealing with family troubles, more internal physical or mental health issues, or a myriad other problems that come with daily life.

“There are a lot of different adversities in this world, so there’s no reason not to be kind to one another, not to support one another,” he said.