“Ever since I was young, I have loved reading science fiction and learning about science and technology. I have always had a big picture idea of where I wanted to end up, but never seemed to find something I felt truly passionate about. That all changed when I found astronomy,” he said.

But Christopherson was uncertain whether he could turn his passion into a career. “I never really saw a connection between where I wanted to be and where I was at the time.”

Then, in fall 2011, Christopherson decided to go back to school. With an initial goal of pursuing a doctorate in astronomy, he began taking part-time classes through UW Colleges Online while working full time, before transferring to UW Oshkosh in spring 2013.

The decision to transfer to UWO was motivated in part by the research happening on campus. “I knew I wanted to study astronomy and I had read some papers that Dr. Nadia Kaltcheva and Dr. Barton Pritzl had written, so I knew what they were studying and it was work that I found interesting,” Christopherson said.

As he began classes at UWO, Christopherson was uncertain whether work and family obligations would allow him to devote time to a terminal degree. Modifying his plans, Christopherson began to pursue a physics major with a secondary education emphasis, with the goal of conducting astronomy research as a hobby.

However, during his first semester, Christopherson’s employer declared bankruptcy, and he lost his job. That event opened the door for Christopherson to revive his original goal. The next semester, he received an Undergraduate Small Grant from the Oshkosh Student Scholarly and Creative Activities Program (OSSCAP), and his research career took off. 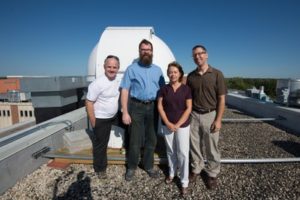 “It started this whole process,” Christopherson said. “Because it started out with talking to Dr. Kaltcheva and saying, ‘Well, what can we research with a small telescope?’ And then after we figured out that we could image regions of star formation in certain emission lines and study the distribution of the interstellar matter, it was like, ‘Well, how do we do this?’”

For his small grant project, titled “Observing Nebulosities,” Christopherson aimed to familiarize himself and several other UWO students with the process of wide-field observations, including data collection and reduction. Additionally, he modified a Canon DSLR camera for the project. “The only things we needed were the three filters to get started,” Christopherson said. “And the grant helped to cover two of these filters.”

Currently, he’s making a cooling system for his camera so he can take pictures faster. “We’re using temperature sensors to monitor the temperature of the camera sensor itself,” Christopherson said. “I’ve got a cooler attached to it that’s going to get turned on and off based on the temperature of the sensor. I’m working on integrating a few more parts of it as well, so by having an ambient temperature and humidity sensor I’ll be able to calculate the dew point. Then I’ll hook up some heaters to the optics and be able to regulate their temperatures automatically to keep the optics from fogging up.”

Christopherson’s work in astronomy has resulted in presentations at the 2014 and 2015 National Conference on Undergraduate Research (NCUR); 2014 Posters in the Rotunda; 2015 Posters on the Hill (making Christopherson the first UWO student accepted to present there since 2004); 2014 Wisconsin Association of Physics Teachers Annual Meeting, where his group won Best Poster; 2015 Wisconsin Space Conference; and American Association of Physics Teachers 2015 Summer Meeting, where he won an Outstanding Presentation award during the Society of Physics Students poster session.

His research is not the only way Christopherson seeks to make science accessible. He periodically sets up a telescope on campus for community observing. Pritzl helps Christopherson get the word out by announcing to the Society of Physics Students and his astronomy classes that a telescope is set up and the sky is clear. Then, said Christopherson, “whoever shows up gets a close-up view to some of the gems of our Solar System and the Milky Way. We’ve done a couple lunar eclipses and seen Jupiter, Saturn and the Moon at various stages, as well as nebulae and stellar clusters.”

Along with professors Kaltcheva and Pritzl, Christopherson worked on the installation of a small observatory on top of the Halsey greenhouse. He and Pritzl are currently setting up controls. The dome will be remotely operated, simplifying the data collection process.

Christopherson’s passion for science outreach has carried over into his work as an Undergraduate Research Ambassador for OSSCAP, a member of URECA! Club (undergraduate research experiences and creative activities), and a student representative on the OSSCAP board. 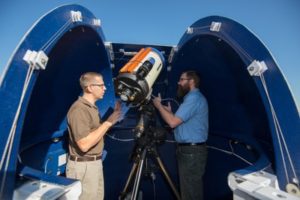 By encouraging undergraduate research, Christopherson hopes to motivate students to ask questions and understand the scientific process. “Research can help give you better perspective on what scientists do. They’re out there asking questions. They’re not necessarily looking for the definite answer,” Christopherson said.

Beyond life at the university, the ability to ask questions enables better decision making and citizenship. “If more students get that undergraduate research experience, you’re going to have a better informed population,” he said. “Being able to make logical decisions instead of emotionally charged decisions I think is a good thing. And I think that’s something that learning about science and conducting research can help with.”

After he graduates in spring 2017, Christopherson plans to head to graduate school to pursue a doctorate in astronomy, a dream that seemed out of reach just three years ago. His advice to fellow students sums up his research journey: “Don’t be afraid. If you never ask, you’ll never be able to do.”