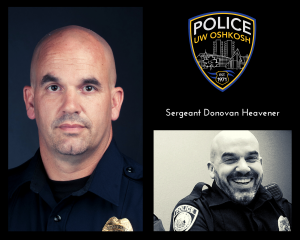 Former member of the UW Oshkosh Police Department Donovan Heavener was shot over the weekend when he interrupted an attempted burglary while off-duty in Payallup, Washington.

Heavener was a sergeant with our department from 2012 to 2016 and during that time formed strong, positive relationships with the UWO community. He was involved with Special Olympics Wisconsin and mentored hundreds of UWOPD student employees. Even though he was here only a short time, his impact was lasting.

Heavener, who is a member of the Federal Way Police Department in Federal Way, Wash., received life-threatening injuries in the shooting, was transported to a hospital and underwent surgery. He is expected to recover.

The UWOPD is collecting items for Heavener that will be sent to the Federal Way Police Department in Washington. If you would like to contribute something to this care package, please drop it off at the UWO Police Department, basement of Radford, 777 Algoma Blvd., before 4 p.m. on Wednesday, Nov. 3, 2021.