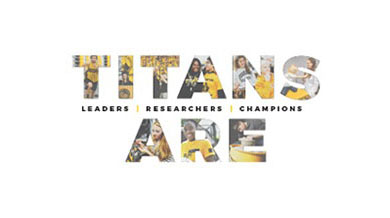 Chancellor Andrew Leavitt announced plans to add the Titan Thunder Marching Band to the repertoire of UWO’s music department in fall 2022. Students from all three campuses will be eligible to take part in the 100-piece unit that will be an integral part of UWO’s Titan game days and other campus and community events.

Art professor Gail Panske is a founding member and president of ArtSpace Collective, a co-operative gallery launched in Oshkosh in 1995. In January, an exhibition of her work Passing Time, inspired by both Canadian thistle and chaos at the U.S. Capitol, was on display at the gallery.

The UWO Counseling Center and the Veterans Resource Center (VRC) partnered to launch the United We Stand campaign that focuses on suicide prevention among service members on all three campuses. Former VRC coordinator Timber Smith encourages veterans to take the first step in having open and honest conversations about mental health.

Mai See Thao, UWO’s new Hmong Studies director, led creation of The Battlefields of Memory, a community-based exhibition open at the Annex Gallery on the Oshkosh campus in April as part of Asian Heritage Month. Artifacts on display testified to the consequences of America’s Secret War in Laos from 1964 to 1973.

A capstone course for her undergraduate psychology degree led Rebecca Timmins ’15, ’20 MS, to open a unique child care center in Appleton that specializes solely in respite care for children on the autism spectrum. Timmins, who began her UWO journey on the Fox Cities campus, opened the doors to Celebrate Neurodiversity! Autism & Resource Center in 2019.

All three UW Oshkosh campuses are recognized by the Arbor Day Foundation for promoting healthy trees and engaging students and staff in the spirit of conservationism. The Oshkosh campus has earned the Tree Campus Higher Education designation for 11 consecutive years; Fox Cities the past nine years; and Fond du Lac earned its second designation in 2020 after holding an Arbor Day Celebration.

Students in associate anthropology professor Jordan Karsten’s spring interim class used archeological methods to search for the body of Starkie Swenson, who was presumed murdered in 1983 in Winnebago County.

Meghan Krueger, a geology student on the Fox Cities campus, earned an unprecedented second $2,000 undergraduate scholarship from the Wisconsin Space Grant Consortium for the promotion and retention of students in STEM (science, technology, engineering or math) fields. Krueger is studying an ichthyosaur skull fossil, a marine reptile that lived in the Jurassic period.

UWO environmental microbiologist Sabrina Mueller-Spitz recently published a story in the Journal of Applied Toxicology about how a high dose of the nanoparticle titanium dioxide—used to brighten white foods like candy, coffee creamer and frosting—altered the gastrointestinal tract in young mice.

The Advance-Titan received 22 awards in the 2020 Wisconsin Newspaper Association Foundation’s Collegiate Better Newspaper Contest and took third-place honors for overall publication. The print and online paper’s coverage of the pandemic and its impact on UWO and beyond earned first-, second- and third-place finishes for coronavirus coverage.

Thirty-five high-achieving UWO seniors who exemplify top academic and leadership qualities and a deep commitment to serving others earned recognition as 2021 Chancellor’s Award for Excellence recipients. The criteria include academic performance, University-related service and community involvement.

The renovated Fletcher Hall on the Oshkosh campus has been certified LEED Silver by the U.S. Green Building Council, the most widely used green building rating system in the world. The more than 50-year-old residence hall underwent a series of updates, including a fully renovated building with a new entryway off Elmwood Avenue.

UWO students took top honors in the March WiSYs Quick Pitch Showcase in which they impressed judges by racing against the clock to give three-minute presentations about the importance of their research to society. Brianna Roberts, a kinesiology major from Beaver Dam, placed first in the Science and Technology Division; and Julia Thompson, an economics major from Kimberly won the Social Sciences and Humanities Division.

Wendy Potratz, a senior accounting lecturer, was honored as a 2021 Excellence in Education Shining Star in the Fox Cities for demonstrating an outstanding commitment to student success and advancing knowledge in higher education.