The UW Oshkosh Model United Nations team maintains a tradition of excellence, as witnessed by its many awards. Each year, the Model UN team participates in two conferences.

The Midwest Model United Nations Competition in Saint Louis is a regional competition involving 50 schools from 15 states. The UWO Model UN team represents several different countries and has a large number of outstanding awards for individual delegates.  The most prestigious awards are awarded to an entire country for outstanding performance. The team has won an average of two outstanding country awards over the past 25 years.

The National Model United Nations Competition in New York involves over 200 delegations and 4,000 students from all over the world. Over the past 34 years, our Model UN team has ranked among the top 10 schools in the National MUN competition, achieving a rank of Outstanding Delegation—the highest award at the competition. 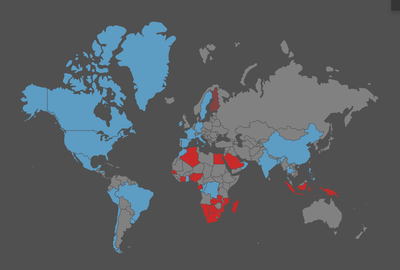 This map reflects the awards that the UW Oshkosh Model UN team has won over the years that represent various countries at both Midwest Model UN (red) and National Model UN (blue).