Report a Crime to UWO Police

You should decide how to best intervene based on your own feelings of personal safety. Check out the general bystander intervention scenarios and strategies below to see which feels right to you; and get some ideas of actual intervention moves. You could prevent a bad situation with just a few words.

If You See Something, Say or Do Something!

You walk into your residence hall and the exterior door is propped open.

You could remind them of the resource “Safewalk or Saferide” for assistance in being safely escorted home on campus.

You see a couple arguing and one of the people is becoming forceful with the other person.

It is always important to remember everyone’s safety when intervening as a bystander. The best thing to do may be to call the police and inform them of what you saw so they could do a wellness check and offer assistance if there is a safety concern.

Your friend tells you that the partner they recently broke up with won’t stop calling them and has been outside all of their classes waiting for them to “talk.”

Remind them of the various options to report their potential concern for safety, such as, the police and UW Oshkosh Dean of Students. Also, remind them of their resources for support, such as the Counseling Center, the Campus Victim Advocate and off-campus resources. You may want to encourage them to walk with someone and to encourage them not to agree to meet alone with the person.

Distract: You could walk up to the woman with a few of your friends, whether you know her or not, and start a conversation with her to separate her from the guy.

Delegate: You could let her friends that she came with know that she seems to need some assistance and help them separate her from the guy. You can always call the police to express your concern for a potentially harmful situation for someone.

Direct: You could confront the male involved without using physical force.

You notice someone is walking around your floor in your Residence Hall that no one seems to know and he gives you an uneasy feeling.

You could let your CA (community adviser) know and they can check out the situation. If you are off-campus and you have the same experience in your apartment complex, you could call the police.

You see someone sitting alone who is visibly upset.

You could ask them if they are OK or do they need some help. Remind the person that the Counseling Center, and Campus Victim Advocate is always available to students, as well as many other supportive resources on and off campus. 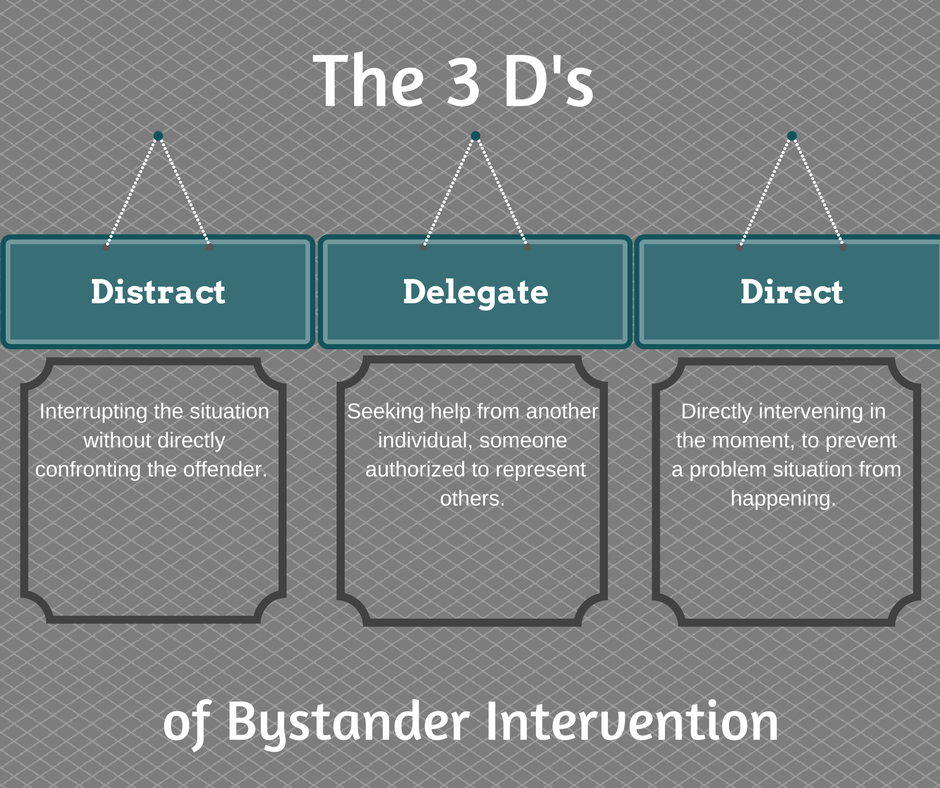 How Does This Make A Difference?

Recognize that sexual assault, intimate partner violence, and stalking are real problems experienced by many college students, even your peers!  About 1 in 4 women and 1 in 33 men will survive sexual assault during their time at college.

Recognize the warning signs of violence or the precursors to someone being taken advantage of. If you notice something or someone tells you about their experience, it’s critical to take it seriously and believe them. About 1 in 4 women and 1 in 33 men will survive sexual assault during their time at college.

Recognize the importance of consent and how we respect others with our actions as root causes of violence and abuse.

Don’t minimize it; stalking is not just a case of “unrequited love” or “excessive affection”, encourage a friend who is worried they are being harassed to seek help.

Don’t brush it off; if something or someone makes you uncomfortable, say or do something.

Watch out for each other; if you see someone who looks like they’re in trouble, ask if they’re ok.

Speak up if you see something offensive or abusive. If you hear jokes about sexual assault or that degrade other people, don’t laugh. Say you don’t think it’s funny to hurt others. Encourage respect.

Get involved with the Respect Program or a partner student organization and consider getting further in-person education.

Many factors influence people’s willingness to help, including ambiguity, perceived cost, diffusion of responsi­bility, similarity, mood, gender, attributions of the causes of need, and social norms.

Situational ambiguity. In ambiguous situations, (i.e., it is unclear that there is an emergency) people are much less likely to offer assistance than in situations involv­ing a clear-cut emergency (Shotland & Heinold, 1985). They are also less likely to help in unfamiliar environments than in familiar ones (e.g., when they are in strange cities rather than in their hometowns).

Perceived cost. The likelihood of helping increases as the perceived cost to our­selves declines (Simmons, 1991). We are more likely to lend our class notes to someone whom we believe will return them than to a person who doesn’t appear trustworthy.

Diffusion of responsibility. The presence of others may diffuse the sense of indi­vidual responsibility. It follows that if you suddenly felt faint and were about to pass out on the street, you would be more likely to receive help if there are only a few passers-by present than if the street is crowded with pedestrians. With fewer people present, it becomes more difficult to point to the “other guy” as the one responsible for taking action. If everyone believes the other guy will act, then no one acts.

Similarity. People are more willing to help others whom they perceive to be similar to themselves—people who share a common background and beliefs. They are even more likely to help others who dress like they do than those in different attire (Cialdini & Trost, 1998). People also tend to be more willing to help their kin than to help non—kin (Gaulin & McBurney, 2001).

Mood. People are generally more willing to help others when they are in a good mood (Berkowitz, 1987).

Gender. Despite changes in traditional gender roles, women in need are more likely than men in need to receive assistance from strangers (Benson, Karabenick, & Lerner, 1976).

Attributions of the cause of need. People are much more likely to help others they judge to be innocent victims than those they believe have brought their prob­lems on themselves (Batson, 1998). Thus, they may fail to lend assistance to homeless people and drug addicts whom they feel “deserve what they get.”

Social norms. Commonly believed attitudes and beliefs prescribe what behaviors are expected of people in social situations (Batson, 1998). The social norm of “doing your part” in help­ing a worthy cause places a demand on people to help, especially in situations where their behavior is observed by others (Gaulin & McBurney, 2001). For example, people are more likely to make a charitable donation when they are asked to do so by a co-worker in full view of others than when they receive an appeal in the mail in the privacy of their own home.