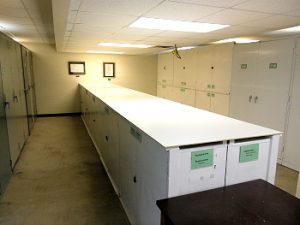 An herbarium (pl. herbaria) is a collection of pressed and dried plant specimens, appropriately labeled as to identity and origin, and arranged in a systematic fashion. An herbarium is a requisite facility for any university, botanical garden, or natural history museum with a commitment to teaching and research in organismal, ecological and evolutionary biology.

The herbarium at UW Oshkosh was founded in 1964 when Dr. Neil A. Harriman began to collect and prepare specimens of plants as part of his teaching and research program. Dr. Harriman retired to Emeritus status in 1998, and in 2009 the herbarium officially named in his honor. Our international acronym in the Index Herbariorum is OSH.

The Neil A. Harriman Herbarium occupies approximately 3,700 square feet in the south basement of the Halsey Science Center (Room 9), which was thoroughly renovated in 2001. Visitors are welcome during normal weekday business hours. Our phone number is (920) 424-1002 and our email address is ladwigl@uwosh.edu.

The UW Oshkosh Herbarium is devoted exclusively to vascular plants: ferns, lycopods, conifers and other gymnosperms, and flowering plants (angiosperms). As one might expect, plants of Wisconsin are well represented; for example, the herbarium houses voucher specimens for comprehensive floristic surveys of Winnebago County (by Katherine D. Rill) and Green Lake County (by Thomas L. Eddy).

However, well over half our specimens originate from areas outside the state. Every continent is represented, as are most major biomes and nearly every family of vascular plants. Over the years, we have received specimens as gifts or exchanges from such diverse institutions as the Smithsonian Institution; Missouri Botanical Garden; the New York Botanical Garden; the Bishop Museum in Honolulu; Academia Sinica in Taipei, Taiwan; the University of the Witwatersrand in Johannesburg, South Africa; the University of Ulm in Germany; and the University of Vienna in Austria.

Among our most significant holdings is our collection of type specimens. Types are the specimens upon which scientific names are based. When a new species is discovered, described and named, a type specimen must be designated. It serves as a standard of reference for the correct application of that name, much as the meter stick or kilogram weight at the Bureau of Standards serve as standards of reference for units of measure. The UW Oshkosh Herbarium includes over 70 type specimens. Among these are a number of species described by the curators (e.g., Aldama mesoamericana N. A. Harriman and Centropogon exsertus Lammers), as well as several named by other botanists in Dr. Harriman’s honor: Phyllanthus harrimanii G. L. Webster, Flyriella harrimanii H. Rob., and Lundellianthus harrimanii Strother. 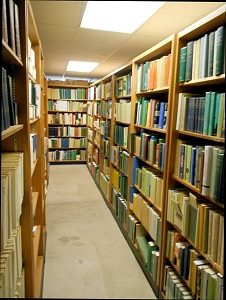 The herbarium is growing at the rate of about 2,000 specimens per year. On 15 March, 2001, we accessioned our 100,000th specimen: the type specimen of a new species from Peru, Centropogon vitifolius Lammers. Today, our collection holds almost 125,000 specimens. At this level, UW Oshkosh possesses the fourth largest herbarium in the state of Wisconsin. Only UW Madison (WIS – 1 million), the Milwaukee Public Museum (MIL – 200,000), and UW Stevens Point (UWSP – 200,000) are larger. However, the geographic coverage of MIL and UWSP are much narrower, with few specimens from outside the Midwestern United States. As such, it is fair to say that the UW Oshkosh Herbarium is the second largest comprehensive herbarium in Wisconsin.

A valuable adjunct to the herbarium is Dr. Harriman’s botanical library. Virtually every current flora and botanical monograph from every part of the world can be found on its shelves, as well as numerous historically important works. Also included are subscriptions to more than 20 scientific journals pertinent to botanical systematics.

The specimens conserved in the UW Oshkosh Herbarium are useful in a variety of ways in meeting the university’s teaching, research and service mission. They provide students with concrete illustrations of plants discussed in class, an opportunity to familiarize themselves with actual examples of botanical diversity. Instructors are able to demonstrate plants from around the globe, irrespective of season or their availability in cultivation. The herbarium is absolutely essential for teaching plant taxonomy (Biol 304/504), where the students use specimens to learn the features of major plant families discussed in lecture and to confirm their identifications of unknown plants. Herbarium specimens are also used as demonstrations and examples in Biology of Plants and Microbes (Biol 231) and Plant Anatomy (Biol 337/537).

In research, herbarium specimens represent the fundamental data upon which all studies of classification and relationships are conducted, and serve as the ultimate basis for every scholarly book and monograph on plants. Detailed morphological descriptions are routinely based on measurements from dried material. Seeds and pollen grains removed from herbarium sheets may be studied under the scanning electron microscope (SEM). Chemical compounds, including DNA, can be extracted from herbarium specimens for use by biochemists and molecular biologists. Labels of specimens contain information regarding geographic distribution, ecological relationships and flowering time, which are of great value in efforts to manage and conserve biodiversity. The introduction and historical spread of invasive weeds can be inferred from the study of herbarium collections, as can the extirpation of rare and endangered plants. Herbarium specimens also serve as vouchers for the correct identity of plants used in almost any sort of scientific study, including determinations of chromosome numbers, phytochemical surveys, hybridization studies, physiology experiments, etc.

In addition to the students and faculty of UW Oshkosh, our herbarium is an important resource for many other users in the state. Conservation organizations such as the Wisconsin Heritage Program, The Nature Conservancy, and the Wisconsin Department of Natural Resources routinely turn to the UW Oshkosh Herbarium for data on the distribution and occurrence of rare and endangered plants. Homeowners, amateur naturalists, teachers, and nurserymen routinely bring plants to the herbarium, requesting expert identification. Our service does not end at the state line, however. Researchers at institutions throughout the world borrow our specimens for inclusion in their own monographic research or send us specimens for identification. In short, a herbarium is a vast storehouse of raw knowledge about plants, which biologists can tap in a variety of ways.