A constant theme that defines Hugh McAloon’s legacy is his love of sports and the outdoors.

The 1983 journalism graduate ran track and played football while at UW Oshkosh. In fact, he followed in the steps of his father and grandfather, and became the third generation of his family to play football at UW Oshkosh. When he won the university’s 1995 Distinguished Young Alumni award for journalism, his passion for sports was the driving force behind that crowning moment in McAloon’s life.

McAloon’s Oshkosh roots run deep. He grew up on Elmwood Avenue, just five doors down from former UW Oshkosh Department of Journalism chairman David Lippert, so when the time came for McAloon to pick what university to attend, he said it was a no-brainer.

“It made sense for me to go there,” McAloon said.

What didn’t make sense to McAloon’s friends and family, however, was his choice to leave his longtime home after graduating to accept a job with Krause Publications in Iola, Wisconsin.

But it was in Iola, population 1,301, where McAloon started his award-winning career. In 1983, he began as a bulk sales manager with the company that specialized in publications for hobbyists like coin collectors or old car enthusiasts.

Eventually McAloon became group publisher for Krause Publications, which he said put him in charge of roughly 60 percent of the company’s titles. Soon the company began growing, developing an online presence and producing some TV shows with McAloon at the helm.

McAloon said this job allowed him to find success through one of his greatest passions: deer hunting.

Despite McAloon’s success with Krause Publications, which earned him UW Oshkosh’s prestigious Distinguished Young Alumni Award in 1995, his attitude toward the company changed after ownership changed twice in just as many years. While he admits the first change was “a real win for employees,” McAloon said the second sale left him disgruntled and feeling uncertain about the company’s future.

So in 2008, after 25 years with the company, McAloon left Krause Publications to form Big Mac Media, which provides media and event-related services to clients in the outdoor sports industry. In 2009, he also founded Deer Fest, a weekend-long deer hunter’s paradise.

“I tell people if you can imagine anything relating to deer hunting, it’s there,” McAloon said.

The festival has become “the nation’s largest all deer festival,” an accolade it proudly boasts on its website. Despite McAloon’s recent success, he remains thankful for the recognition he received from UWO more than 20 years ago.

“It was an honor to go back to the university to be recognized as a guy who was on the right track,” McAloon said. “I wouldn’t say succeeded quite yet, but when you’re a young alumni, you’re on the right track.”

He also remains thankful for the education he received from the journalism deparment. “I first thought I would be an accountant, but that didn’t last long,” he said. But when he found journalism – and the variety and scope it offered — he knew he had found the right career. 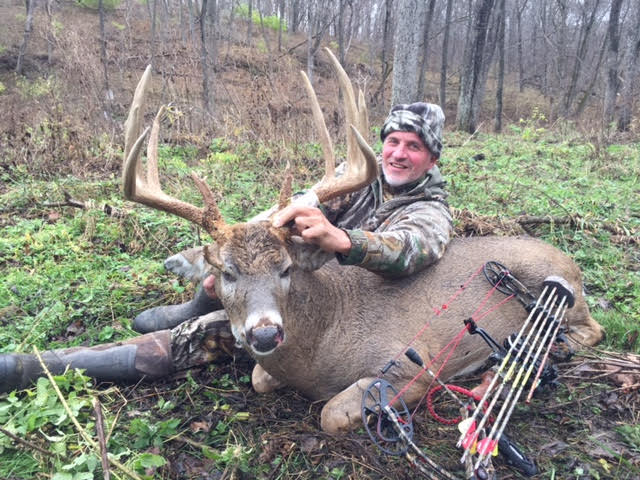 He said Bill Scrivner was his favorite professor. “Bill was dry and stoic, but I always absorbed everything I could from him because he had such a long career with Madison Newspapers,” McAloon said. “I always figured I would work in newspapers, and he had a vast knowledge of the newspaper industry.”

While McAloon ended up not taking that path, he did use his journalism training at Krause Publications. Still, he admits he would do a few things differently if given a second chance.

“If I had to do it all over again, I’d make sure I didn’t miss any of my classes,” he said. “I would also take advantage of all opportunities that were available. College is really the best years of your life.”

Journalism is a field that has evolved, and you could say the same about McAloon’s career.

“I spent 25 years at a publishing company, and when I started it was all print, then online, then TV shows, then events,” he said. The internet has had a big impact on the industry, and you need to keep learning to be successful, he said.

“My business today is really an event business, but the event must be media promoted, and I have to stay on top of things,” McAloon said. That means learning how to integrate video, use social media, and more. But it’s those areas that have the biggest rewards.

“Now everyone is doing their own YouTube channels and they are getting more eyeballs than some of the outdoor networks,” McAloon said.

His advice to students and young alumni is simple: take advantage of the opportunity to learn. “The times are changing, and changing fast. So take it all in.”